The Good, The Bad, and The Ugly by: John Burke WEEK 3 THE GOOD, THE BAD AND THE UGLY 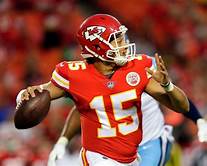 There was a lot of talk and speculation that Mahomes' play would tail off from his historic run
last year and rightfully so, typically there is always regression after a stellar year. Even more so after
a record breaking one. Mahomes took the league by storm a year ago throwing for 50 TD’s
and over 5,000 yards, everyone had to be right he couldn’t possibly match that pace again… So
far … wrong … he is on pace for 53 TD’s and 6400 yards passing. Will that pace keep up?
probably not but I do not see too much drop off coming. He has had 14 straight games of 2 or
more TD’s let that sink in one more and he ties Peyton Manning record of 15. The kid can flat
out ball and in my opinion we are simply watching greatness . Enjoy it

The officials in this years NFL are plain awful. The league needs to address it as quick as possible. There was anurgency to usher in
this new wave of officials after the veterans retired and it has been bad. The
excessive ticky tack calls, phantom block in back across the league and let’s not forget the
offensive pass interference calls. Even Tommy Terrific stated his displeasure with the way a
game was being called by tweeting out he could no longer watch. He was right. They are taking
away from game flow. They are deciding outcomes in some cases,which should never happen.
The competition committee is a joke. The new officials are horrendous and the league needs to
take the proper steps to fixing it and letting football players be … you guessed it football players. I get it a penalty is a penalty. They should call it and move on but stop with these game altering calls on some complete BS. Clean it up !!!

Its honestly embarrassing for NFL fans to have to sit through a game with this slop of a team.
From their god awful “fight song” to their horrendous construction of an NFL roster and
coaching staff. SHAMEFUL is the word that comes to mind when discussing this team. Here are
some fun stats for you about the Dolphins historically bad start to the season. They are
obviously on pace to not win a game to become only the 3 rd team in NFL history to do so. They
are on pace to allow the most points and TD’s while on the other side of the ball on pace to gain
the fewest yards allow the most sacks and throw the most picks all worst in NFL HISTORY !!! in a
game that has come so far and developed into the juggernaut of a league with stellar athlete’s
on every team, the Dolphins have figured out how to have the least amount of those players
and possibly the worst coaching staff in the league .If you’re a Dolphins fan all I can say is may
god have mercy on your soul … dig in it won’t get any better any time soon